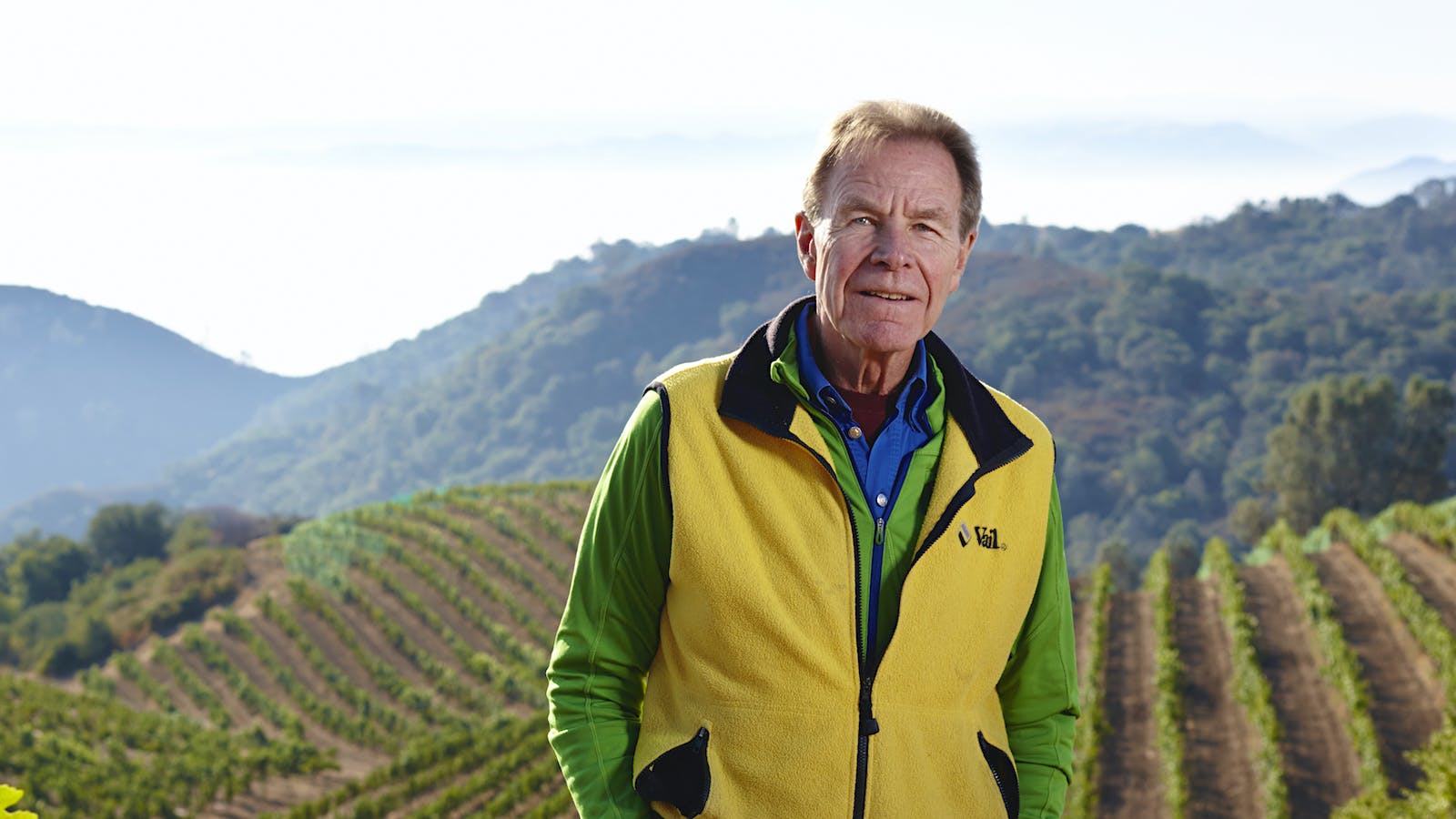 The limestone hills of Mount Harlan on California’s central coast are forever linked to winemaker Josh Jensen. Founder of Calera Wine Company, Jensen was not only a pioneer for the region, located in the remote Gavilan Mountains near Monterey, but also a California wine pioneer. Jensen pursued an impossible dream of making Burgundy-style Pinot Noir in California and succeeded, becoming one of the top Pinot Noir producers in the state. The visionary and icon of the California wine industry died June 11 at his home. He was 78 years old.

Born February 11, 1944, in Seattle but raised in Orinda, California, near San Francisco, Jensen did not grow up in a house with wine, except for special occasions when a friend of Jensen’s father, George Selleck, was visiting. Selleck was a wine connoisseur and introduced Jensen to wine.

While at Yale, earning a liberal arts degree, Jensen was a crew member and later traveled to England to attend Oxford, earning a master’s degree in social anthropology. There, Jensen began to travel through the wine regions of Europe.

Jensen spent much of his twenties in Europe, sleeping in ramshackle hotels or on friends’ couches. While his accommodation left a lot to be desired, the food and wine were not. Jensen often ate in some of the best restaurants in France and fell in love with Burgundy.

He won a grape picking concert at the Domaine de la Romanée-Conti. The following year, he worked at Domaine Dujac, followed by a stint at Château-Grillet in the Rhône. He then returned to California, determined to find a vineyard site that lived up to the limestone soils of Burgundy’s Côte d’Or. With no winemaking or business background, Jensen’s dream was lofty, but he showed dedication.

In California, he began looking for the perfect property to plant pinot noir. Jensen pored over old geological maps that identified potential limestone. Finally, in 1974, he found what he thought was the perfect place, on the slopes of Mount Harlan in the Gavilan Mountains, which separate Monterey and San Benito counties. Back then, this remote and rugged location had no paved roads or electricity and virtually no running water.

Jensen lived in a trailer with his wife and then his 7-year-old daughter and nicknamed the property Calera, after the Spanish word for “lime kiln”. The first of his three vineyards was named in honor of his father; Doctor Selleck, who introduced him to wine; and Bill Reed, an investor in the company. The vines are planted on steep slopes reaching up to 2,500 feet. In 1978, Jensen launched its first wines.

Calera wines have a distinctive style unlike any other California Pinot Noir. Each of the estate’s six Pinot Noirs is made the same way: 100% whole bunches fermented using ambient yeasts, then aged in French oak barrels before being bottled without filtration.

“The thing about Josh is you knew what you were going to get,” said Calera winemaker Mike Waller. wine spectator. Waller noted that while the wine business has evolved over the years, Jensen never has. “He stayed true to what he believed in, and that’s what made Calera a special place.”

Loaded with natural acidity, these medium-bodied wines display lively fruit flavors with a base of limestone and minerals. “I graduated from UC Davis, where they teach you how to make wine in a very clean, precise way,” recalls Waller, who joined in 2007. “When I came to Calera, I been thrown for a loop. The essence of Calera is all about the vineyards.”

Jensen would then go on to establish his own clone of Calera Pinot Noir and plant three other estate vineyards, as well as small blocks of Chardonnay, Aligoté and Viognier. He also spearheaded the creation of Mount Harlan as an American Vineyard Area (AVA), which was completed in 1990.

After 43 harvests, Jensen sold the winery to Duckhorn Wine Company in 2017. Jensen commented on the sale at the time, “Having started the winery on a hope and a prayer is a wonderful way to secure the future de Calera. I was able to place my life’s work in the hands of real wine people who believe in quality.”

Jensen will be remembered for his great wit and charm, his unique sense of fashion, his generosity of spirit and his generosity to his beloved Calera team. “He will be greatly missed,” Waller said. “He cared deeply about the land and was extremely generous with all of his employees. People stayed because he treated people so well.”

Jensen is survived by his three children – Silvie Jensen, Duggan Jensen and Chloe Jensen – and five grandchildren. “I’m not sure my words are enough to express my love for my dad and how much I will miss him,” Silvie said, “but I will add that Josh was a true original. He was larger than life, a dreamer, an idealist, a generous spirit, a man devoted to his friends, community and family and, above all, to the ideals of friendship, truth, fairness, good food and good wine and stewardship of the land. He will be sorely missed by all of us.”