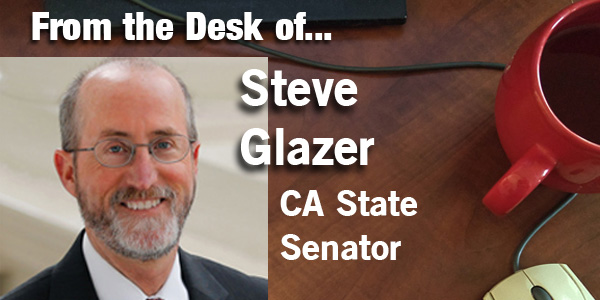 It’s a nice reward for all the hard work that key allies and friends put in when the Governor gets them across the finish line with a signature. It is especially gratifying to have important legislative priorities for my district signed into law.

Governor Gavin Newsom has signed three of these bills and proposals that I have been working with partners on, in some cases for years.

SB19 will allow licensed winemakers or brandy makers to operate two off-site tasting rooms under their winemaker licenses. This bill, which comes into force on January 1, 2022, will particularly help small wineries and family-owned businesses operate as California continues to recover from the pandemic.

There are about 55 wineries in my district including Livermore, Oakley, Brentwood, and Moraga.

Small, family-run wineries have struggled as they rely heavily on visitors and direct sales. With tourism hit hard by the pandemic and the aftermath of the wildfires, I’m glad Governor Newsom has recognized that these wineries need this additional outlet to offer tastings and sales to their customers.

Under SB60, cities and counties will be allowed to impose increased penalties on short-term rental hosts who violate local property rental laws. SB60, which took effect immediately, allows localities to impose fines of up to $ 5,000 for a violation of a short-term ordinance.

The law is an attempt to curb the sometimes violent house parties that occur in short-term rentals due to lax monitoring of these properties. These large gatherings have turned some short-term rental properties into sites of underage drinking, fights, noise complaints and violence.

Local governments will now have the tools to ensure the safety of those who want to continue using short-term rentals and residents who live nearby.

Lower fines were ineffective in deterring infringements. Hosts could charge rent for large houses so high that fines were simply seen as a cost of doing business.

Short-term rental usage has exploded 105% over the past three years, according to vacation rental data compiled by AirDNA. While short-term rentals offer a way to improve tourism and earn extra cash for homeowners, their recent proliferation has allowed bad actors to use the platform to advertise and secure homes for. large celebrations, often in violation of local ordinances.

The COVID-19 pandemic has led to an increase in the number of people using short-term rentals to escape public health restrictions on large public gatherings. Party noise complaints have tripled since the start of the pandemic, according to Host Compliance, which tracks legal compliance among short-term rentals for 350 cities and counties in the United States.

In the last half of 2019, 42 people were gunned down inside or just outside a short-term rental property across the country and 17 people died.

Instead, thousands of acres of East Bay wilderness threatened by an expanding off-road fleet will be preserved.

The legislation, approved in recent governor’s budget bills to take effect immediately, will end plans to extend the Carnegie State vehicular recreation area to the 3,100-acre Tesla plot in the south corner. -is of Alameda County. Scientists have described the area as a biologically unique habitat, and Native Americans have long considered it a sensitive historic site.

This land will now become a new state park closed to motorized recreation. The State will reimburse the all-terrain vehicle fund for the purchase price of the land, its surplus value and the money spent to plan the expansion, which residents and public bodies were opposed from the start there. at 20 years. This money will be used to purchase and develop an off-road park at another location.

Our community and region will preserve this natural and cultural treasure, leaving it intact for future generations to enjoy. During this time, off-road enthusiasts will be able to keep their current park and receive funds to develop another park on land more suited to this type of recreation.

I appreciate the hard work that so many key people have done to move this critical environmental and cultural issue to the governor’s office and, of course, for the governor to work with all stakeholders to sign this important agreement.

I was proud to partner with Assembly member Rebecca Bauer-Kahan, the Sierra Club, the Friends of Tesla Park, and other environmental organizations and individuals to gain final governor’s approval. Earlier, former Assembly member Catharine Baker worked with me on the same issue.

Steve Glazer is the California State Senator representing the 7th Senate District. If you have any questions on this or any other topic, you can contact him atsd07.senate.ca.gov.

Is this luxury wine company losing its bouquet?

Wine tasting room keeps changes made due to COVID