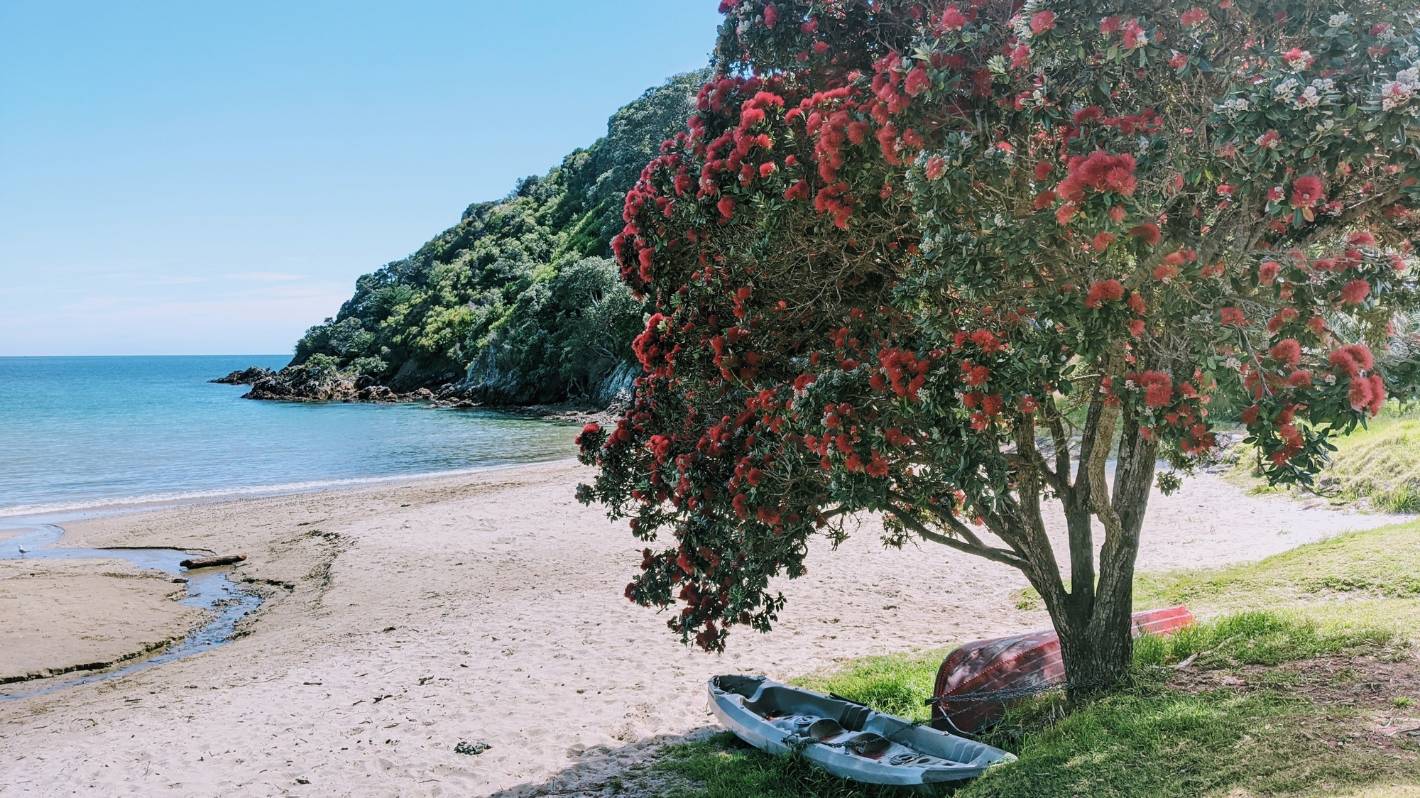 I had heard so much about Waiheke before taking the Fullers ferry to the island. My first impression came from my boyfriend who told me about visits to his parents accompanied by photos of sipping wine on sunny shores.

Then during my stay in Wilderland, a girl who was staying in the town with us told me about growing up on Waiheke Island. She told us how the island has grown from a peaceful, bohemian outpost to a place of quick gentrification for second home buyers.

My travel friend Laila and I had other conversations that seemed to confirm that a trip to the island might be out of our budget. The fact that neither of us liked wine meant we weren’t particularly tempted to take a day trip for a Waiheke wine tour either. However, after repeated trawling through photos on the internet, we were too taken by the beauty of the island not to make the trip.

As we glided over the calm waters of the Hauraki Gulf, we passed the towering volcanic peaks of Rangitoto Island. It was surreal to see such an expanse of unspoiled wilderness with the glassy towers of the Auckland skyline still shining in the distance. As we approached Waiheke, we could see the ornate slopes of the vineyards we had heard so much about.

READ MORE:
* The best places most tourists miss on Waiheke Island
* My Haven: Vanessa Marshall shows us around her house in Waiheke and her neighborhood
* Why should you take a walk around spectacular Waiheke Island

The ferry terminal was buzzing with life, taxi drivers were calling while waving signs, family members hugged and people were jostling to line up for buses. Laila and I hadn’t made any arrangements for our trip, so we smiled and shrugged, heading up the road to see where it was going.

The eclectic nature of the island first dawned on us when we entered the town of Oneroa. Laila walked into a hippie shop scented with incense and decorated with ethnic wall hangings, I waited outside and people watched. Well-heeled people strolled along a line of upscale restaurants as a throng of schoolchildren walked out of the local dairy, ice cream in hand.

We peered through the windows of a real estate agent, excitedly pointing out beautiful beachfront properties that have soared in value to millions. Laila wanted to keep looking around town so I decided to check out the beach. Descending a path lined with exotic bird of paradise flowers and scented with blossoming hibiscus, I reached the shore.

The soft sands of Oneroa Beach were lined with flowering pÅhutukawa trees, the sun was setting and the townspeople were out in force, walking their dogs and chatting as the waves slammed their feet.

When Laila joined me, we strolled along the beach, in awe of the beautiful houses that overlooked the ocean. Each house seemed to have its own section of beach, with chairs and tables on the sand and swings hanging from pÅhutukawa trees. We stopped in and spoke to a couple walking their dog and people waved to us as they sat watching the sunset, it had a lovely small town feel.

We strolled across the bay to Little Oneroa, noticing our rumbling stomachs, enthusiastically headed to the fish and chip shop, and had our dinner listening to the waves and the wind blowing through the trees.

We have discussed how the island compared to our expectations so far. Even though I saw so little of it, I was surprised to find that the island had such a unique character. It seemed like the things we had heard were true, there were clear signs of demographic change, but it still seemed somewhat intact.

Later that night, I strolled through Little Oneroa, a group sitting around a picnic table speaking Spanish and strumming a guitar. The island was buzzing with life, albeit at a much slower pace than near Auckland. Where I’m from, in the UK it would have to travel much further than a ferry ride from our largest city to find that level of peace and quiet.

Waking up the next day, we searched online for local walks on which we could explore Waiheke more. The coastal walk from Little Oneroa to Palm Beach notably allowed us to discover more of the famous Waiheke coastline.

The sky was clear and it was pleasantly warm. It was a beautiful spring day on the island. Beginning at the end of Little Oneroa Beach, the path meandered through pristine native bush, the sun illuminating the canopy of tree ferns. Passing through the trees, we reached several magnificent lookouts, overlooking the crystal-clear waters of the ocean below.

Reaching a particular cove was a highlight, a local girl watched her golden retriever as it waded through the waves. Rock pools as clear as glass adorned the shore alongside kayaks pulled onto the beach. The Supreme Jewel consisted of three pÅhutukawa trees that had grown to blend into each other, forming a bridge wide enough to be crossed.

Continuing the walk, we came to a bench with an amazing view of the ocean. We could see our final destination of Palm Beach, a stretch of white sand with water so blue it was difficult to look at in the intense sunlight. It was so clear that day that you could see beyond the beach to the mountains of the Coromandel Peninsula.

We walked through a beautiful valley of tree ferns and palm trees, their branches singing with the calls of tÅ«Ä«. As we walked down the stairs to the beach, a lady stopped and explained how beautiful the beach was and how warm the water was, which peaked our excitement. The sand was warm and the ocean was translucent and turquoise, it was pleasantly busy, people giving us the waves and smiles we had grown used to on the island.

Palm Beach was a lovely little settlement, with a well-dressed crowd sitting in a restaurant called Arcadia that looked like a renovated, airy beach hut, its windows wide open, the mouth-watering smells of the kitchen wafting through the air.

Unfortunately it was not in our budget to have dinner at the restaurant, but we had some snacks at the dairy and found a lovely spot in the shade. Our day was spent people-watching and reading our respective books, as well as taking a dip in the ocean, which was a bit colder than one might have thought.

By leaving the island the next day, I had gained a whole new perspective on Waiheke Island. We have found a diverse community that seems to be dealing with development and change from being so close to a city as big as Auckland. It is a breathtaking region and it would be a shame if it lost its character and landscapes due to this continuous evolution. What surprised us is that it can be visited on a tight budget.

It’s such a beautiful island that you don’t have to travel too far to find a measure of beaches and views that I have found hard to beat throughout my travels around Aotearoa.

Andy is originally from the UK but is traveling to New Zealand on a working holiday visa. You can read more about his adventures here.