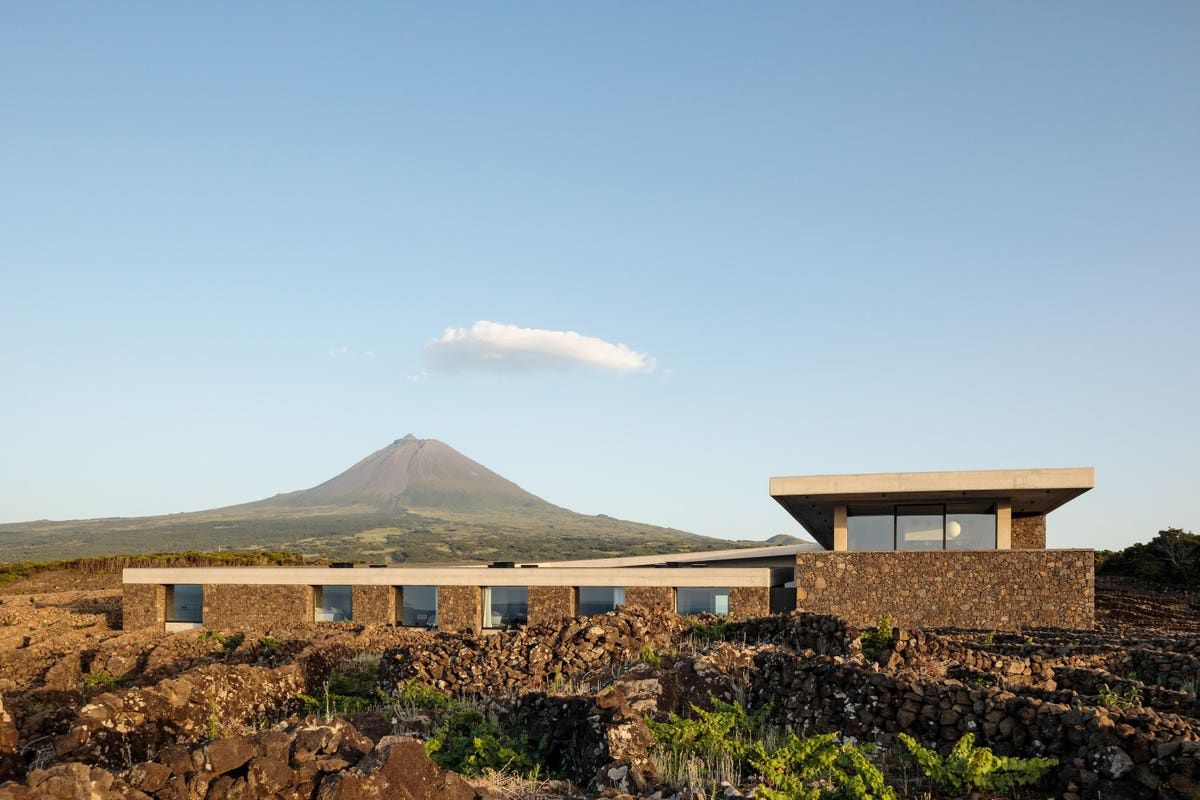 Historically, the cellars of the Portuguese Azores Islands have never been places of wine production. They were places of social gathering, where owners invited their friends and family to drink wine, eat, and sometimes sleep if they didn’t feel like going home after wine and meals.

So when the partners of the Azores Wine Company decided to set up their winery on the island of Pico, they followed this tradition, established centuries ago, almost as soon as the Portuguese discovered the previously uninhabited islands. It would be a wine estate then others, with rooms for overnight stays, a long table for meals shared with friends and a welcoming tasting room.

Expectations were high, as the Azores Wine Company is one of the most popular projects in Portugal. Founded in 2014 by winemaker António Maçanita, founder of the gastronomic festival and director of the Filipe Rocha school of tourism and winemaker and native of Pico Paulo Machado, the company has essentially put Azorean wines on the contemporary map. Right out of the door, their wines have won numerous accolades. The grapes they produced became the most expensive in Portugal (which is understandable given the harsh growing conditions and the very high quality), on par with grapes from Champagne, Bordeaux and Napa Valley. So they couldn’t build just any cellar. It had to be special.

They chose four architects for the job. Inês Vieira da Silva and Miguel Vieira of SAMI – Arquitectos are long-time residents of Pico, and their company is behind the proposal that led to the attribution of the island’s wine landscape and culture to the Unesco World Heritage. They worked with English architects Daniel Rosbottom and David Howarth of DRHR, whom they had met at international conferences and who had contacted Maçanita when Howarth needed information about Pico vineyards for a project.

The owners and architects traveled to the Loire Valley to research and reflect, as it has countless small vineyards and the dominant grape varieties share a genetic link with those of the Azores. Unlike French vineyards, however, their plot offered views of the ocean, the namesake volcanic mountain of Pico, and the neighboring islands of Faial and São Jorge.

Because the land is in this area protected by UNESCO and subject to strict measures, and because all the actors wanted their project to have minimal impact on the landscape, they settled on a square plan clad in stone. from the same plot. The aim was to feel like an extension of the distinctive stone enclosures that protect the vines. (More details later.) The lower level, closer to the sea, is almost invisible from the street.

The shape also echoes two Pico traditions. It is reminiscent of the ancient water reservoirs of vineyards, and with its sloping roofs, it collects around 1.5 million liters of water, which are used to water the vines. The other historical reference is the island’s monasteries. The square shape gives it an open-concept cloister surrounded by five apartments (one with two bedrooms), a tasting area, a restaurant, barrel cellars and technical rooms.

About these wine enclosures: These are walls hand-built from black basalt, about half a meter high, and sort of made without any mortar. The idea is to keep the grapes nice and warm in the cool climate of the Azores. And there is a parcel of them, many of which remained from years when Pico was covered with 15,000 hectares of vines. (For context, today’s Alentejo, Portugal’s largest wine region, has around 23,000, says Rocha.) The statistic that is thrown is that if you take down the walls and lay their stones end to end. end, they would circle the equator twice.

When the owners arrived, the walls were filled with forest and their team spent more than two years restoring the plots. The vines were planted in 2017 and the first harvest took place in 2020. In total, the investment in the cellar, which also aims to develop Pico as a wine tourism destination, amounted to 3 million euros.

It was money well spent. The bedrooms, with their plush beds, concrete walls and floors, and wide-angle views of vineyards cascading down to the ocean, are as beautiful as it gets. In the restaurant, the talented chefs José Diogo Costa and Angelina Pedra develop ambitious (but successful) tasting menus to be enjoyed on a magnificent table centered on a basalt stone and facing the vineyards and the sea, or a more informal menu to share at the counter.

And then there are the wines. I’m not a wine critic, but I would happily say that they are superb: mineral, saline, well balanced and one of a kind. (If you want a critical review, Robert Parker awarded a lot with over 90 points, and the 2018 Vinha Centénaria with 95 points.) They also have a taste for history.

Maçanita, whose official biography includes words like disruptive, restless and hard, has a passion to revive abandoned grape varieties and techniques. (He was making amphorae wines ten years ago, long before they got cold.) And Pico was ripe for it.

The island once had perhaps 15,000 hectares of vineyards and produced prestigious wines that could be found in the cellars of Thomas Jefferson, the European aristocracy and the Russian tsars. But almost everything was wiped out by powdery mildew and phylloxera in the 19th century. In 2004, when the island was classified by UNESCO, only 130 hectares of vines were restored. Five years after the creation of the Azores Wine Company, there were 650 hectares of the island’s three indigenous grape varieties, Arinto dos Açores, Verdelho (not to be confused with Verdelho on the mainland) and Torrontez do Pico, an almost extinct varietal that Maçanita had never heard of (there were only 89 plants left!) Of course he saw this as a challenge.

He accepted this challenge and won. Sure. There are now over 1,000 hectares of vineyards (all three white and two red) on the project, and a new generation of winegrowers are starting their own production. Of course, 1,000 is still a long way from 15,000. But as Rocha says, it doesn’t have to be. Wines, hospitality and experience are gems of the wine world, and aficionados just need to be able to look them up at the Azores Wine Company.