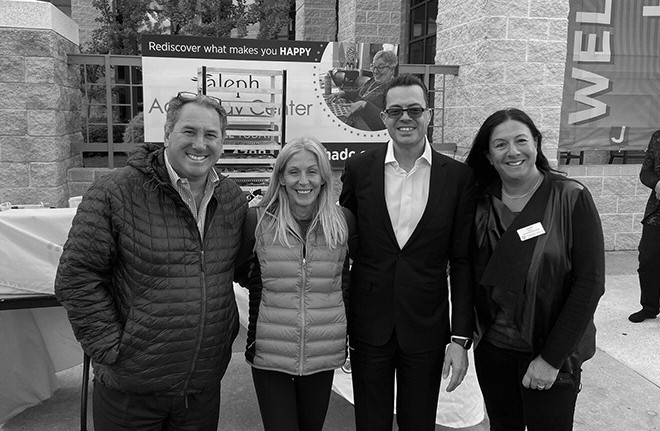 Event co-chairs Adam Kaminer and Kelly Gottlieb (left and second from left) were joined by Marcelo Rouco from Ecosave (second from right), the event sponsor and the Senior Federation Development Officer Leah Wolf during the distribution of participants’ baskets – finished with wine from Tulip Winery, a cheese plate and gifts from sponsors.

The Jewish Federation thanked its top donors and kicked off its JFund 2022 campaign with a glimpse into the Israeli wine world at its Chai Society donor event on October 19. Not only was there a wine tasting led by Josh Greenstein, a New York representative of many Israeli wineries, there was a special look at Tulip Winery. Based in Kfar Tikva, Israel, Tulip employs dozens of people with special needs.

“Tonight is about showing appreciation,” said Amanda Kaminer, one of the evening’s co-chairs, with Adam Kaminer and Kelly and Larry Gottlieb.

Adam Kaminer spoke about the importance of supporting the Federation’s unrestricted fund. He said the unrestricted dollars coming to the Federation were like the trunk of the service tree that supports the branches and leaves of community giving.

The program also featured Jewish Federation President Harry Platt doing Kiddish over wine and featuring a video about the Federation and its areas of impact and Federation CEO Jennifer Dubrow Weiss speaking about the 100th anniversary. from the Jewish Federation of Southern New Jersey. She noted that thousands of people across the region rely on Federation programs. She then presented a video on Tulip Winery narrated by Amar’e Stoudemire, former NBA player, Israeli citizen and winemaker.

Josh Greenstein, the evening’s guest speaker, invited those who log into the virtual program to open the bottles of Tulip wine they had received. The fifth generation of his family in the wine business, Greenstein spoke about the wine scene in Israel. “There are around 350 wineries in Israel and growing,” he said.

Speaking of the history of Israeli wine, Greenstein spoke of winemaking 2,000 years ago, the modern period beginning with the Rothschild family in 1882, and continuing until today. “The joke I’m making is that Israel has been producing wine for 5,000 years and they’re just starting to get good at it,” Greenstein said. He mentioned that he would present three Israeli wines at an upcoming show. He added that Wine Enthusiast magazine published an article on Israeli wines. Israel’s wine, Greenstein noted, is not just for Jewish holidays.

Greenstein also offered wine tips and answered people’s questions about the 85 cameras hooked up to the event. He spoke about extending the shelf life of wine once the bottles are opened, giving Israeli wine as a gift, and supporting the Israeli wine industry as a whole, including asking for Israeli wines in restaurants.

Israeli wineries, like many wineries around the world, have performed well during the Covid pandemic, according to Greenstein. They are considered essential businesses.

Greenstein concluded his speech by talking about Tulip Winery, which continuously employs 30 to 50 people with special needs. This number doubles during harvest and Jewish holidays. He praised Tulip’s slogan: “We only put labels on wine, not on people. He noted that Tulip wines are available at ShopRite and make great gifts.

Wine tasting room keeps changes made due to COVID