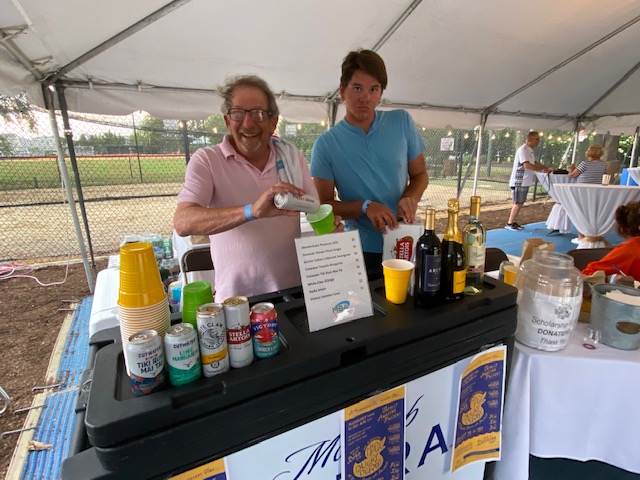 MARGATE – Over the past 19 years, the Margate Business Association and its dedicated volunteers have raised more than $122,000 for scholarships awarded to students who attended Margate public schools.

Dan and Maria Walters, who helped the late Joe Tozzi form the Margate Business Association years ago and for whom the MBA scholarship program is named, provided Downbeach.com with a history of wine tasting, which has started at Steve & Cookies By The Bay and became so successful that it exceeded its inner digs.

The COVID-19 pandemic was the catalyst for holding the event outdoors at the back of the Sigmund Rimm Recreation Complex on Edgemar Circle last year. On Friday night, more than 400 people attended the party, which included wine and spirits tastings, food trucks, music and live, online auctions. Auction items were packed onto an 8ft square of tables under a tent and attendees used their cell phones to bid on items which included dinners at local restaurants, beach gear, bicycles fixed and ready for the road, fine jewelry and more.

But it was the social atmosphere that made the evening special. According to AnnaMaria Blescia, Executive Director of the MBA, the organization had additional tents erected to ensure the party would continue if it rained. Luckily the rain held up and everyone enjoyed the whole party.

Maria Walters said she and her husband Dan, both retired educators, were among the original MBA members who formed their group to promote business and the Margate community.

“As the association began to grow, we needed an event for the community to do, so we formed Funfest by the Bay. Once it started and was so successful, we decided to do some charity stuff and we sold a lot of raffle tickets and 50-50. We wanted to be involved all year round and that’s how the scholarship program started,” she said.

The event “started small” with around 75 people in attendance, but quickly grew to around 175, and the event was labeled “sold out”.

It didn’t sit well in the community, so the MBA started looking for a bigger room.

“Last year we had it here on Edgemar Circle because of COVID, and it became an amazing event for such a small organization,” said Maria Walters. “People were so excited to be together outside, so we decided to come back. It’s the perfect setting for that.

“Because we were so involved in the work of the MBA, the organization decided to name the scholarship for us,” Dan Walters said.

Maria Walters said the group decided not to ask a lot of personal questions about parents’ finances, so they based the scholarships primarily on academics. Students are required to submit prompt-based essays and provide three reference letters and proof of acceptance to a college or university.

“Our first scholarship was $1,000, but now we’re giving two $2,500 scholarships to graduates of any high school who attended Margate City public schools,” she said. “The funds go to the student to use as they see fit. We felt they should have the money to make their choices and they are still very grateful.

Six judges — three from the MBA, including Dan Walters, who oversaw Absegami High School’s English department for many years, as well as a business owner and community members — blindly review applications, which are now submitted electronically.

Maria Walters said the first recipient was a Subin, and when he graduated, “he wrote us a wonderful letter thanking us for the scholarship. We hear from the students from time to time and often meet their parents “, she said.

“They are always so kind and grateful.”

The event was co-chaired by real estate agent Paula Hartman and her daughter Dana Hartman-Hiltner.